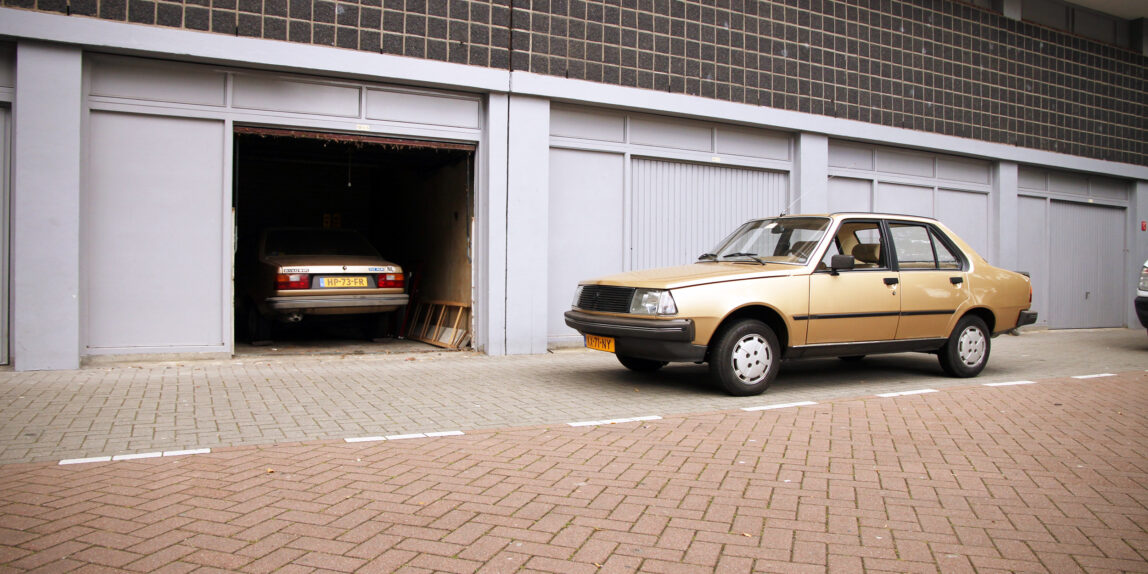 My old Renault 18 has been in storage since march 2002. But when I drive a car in my dreams it’s the Renault 18. Never in my wildest dreams I imagined owning two identical Renaults 18.

In the first years after I put my R18 in storage, I did some work on it to keep it running. But having a car stored some 65 km from home is not the most practical thing when you want to work on it. Especially when my girlfriend entered my life and my 2 sons were born in the years there after.

Recently I decided that if I seriously want to rebuild the old R18, at least I could start with looking for the parts needed for the job. So I created a search profile for Renault 18 parts on ‘Marktplaats’ (a Dutch equivalent of eBay).

After a few weeks to my surprise I found a twin sister of my old 18 that was offered for sale. And not only that. This specimen looked to be in pristine condition, with low millage and was offered with a fresh ‘APK’ (MOT-certificate).

For sale for 25 yaers

I looked into the public data available for this car and found it’s last APK expired … 25 years ago!!! I made a call to the garage selling it and they told me the car had been for sale for all these years. The father of the current owner had bought it as a trade in for an other car in 1995. They had kept it in running condition since. The son of the current owner is in his early 20s and to him the car has been there forever.

Every now and than people had inquired about the car or had made a test drive. But no one had bought it. And in a few cases the garage owner had refused to sell her, because the potential buyer wanted to use the car as a daily transport or wanted to negotiate a lower price.

I decided I at least had to make a test drive. So I undertook the 2 hour trip with my youngest son to have a look.

I was amazed at the condition the car was in. These cars are prone to rust, but there was hardly any to be found on this one.

Driving a Renault 18 for the first time in 18 year was a bit intimidating to be honest. I haven’t driven a car without power steering for over 10 year. And you can handle my current Peugeot 308SW with just your pinky. So handling 1000 kg of car with just sheer muscle power felt rather Spartan.

But what a beauty!!!

I pondered over my options for 2 and a half weeks. Working out the extra costs of owning a second Renault 18, inquiring about the best anti rust treatments, options for a garage or dry parking space near by, and so on. I decided I just couldn’t let this chance pass me by. So I bought it! On August 1st I traveled to the garage again. This time it was a 4 hour trip by public transport.

For the family owning the garage it was an emotional moment to part with this car after 25 years. I made a picture of them with the car and they waived me goodbye when I drove off.

On the way home I made a stop at the garage where my other R18 is stored. 2 almost identical Renaults 18 in 1 picture made on a summer’s day in 2020. How rare is that!

Some small parts, like the jack with it’s wrench and a few other items that were missing changed car.

After that I picked up one of my brothers and we drove passed the house where we grew up and I spend many hours working on my first Renault 18.

Than I continued my journey homeward.

Back to The Hague

One of the interesting details I found about my ‘new’ Renault 18: On the original warranty papers that came with the car, I saw that the first owner lived in The Hague, just 2 km from where I live now. I know the dealer that sold it. And on it’s first trip after it was delivered in april 1984 it must have passed my current home within 150 meters! It’s a nice thought that this great old car already traveled the streets of my neighbourhood when it was brand new and I didn’t even have my drivers licence.

So in a sense this Renault 18 returned home.