It’s hard to believe these day’s, but 30+ years ago safety belts in the backseat weren’t mandatory. As a kid I sat in the backseat with my sister and 2 brothers without any protection. And the Renault 18 also came with just belts for the front seat. I have two kids aged 4 and 6. I could take only one with me, because these days a kid below 135 cm has to be transported in a proper seat suitable for children and with a seat belt. So they fought with each other which one of them could come for a ride.

Lucky for me (and my kids) the attachment points in the Renault 18 are already there. There even is a hole to fit an automatic roll up mechanism. So after some research I found belts that in theory would fit. But as always the reality is a bit more unruly.

First of all the belts are made for build on, not build in. So with some persuasion I managed to flip the buckle and attachment point for the pillar.

Than the hole in the side turned out to be just to small. Eventually a file tool saved the day. So now I my kids can both come along for a ride in the old Renault. 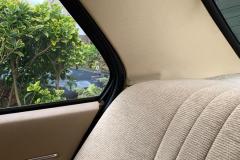 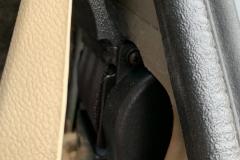